So I was working on an illustration of a witch to go along with a poem, "Listen to the Witch." I had an idea that I wanted to try that would require a rather complicated and ghoulish lighting so I needed a reference. Where could I find a model who would pose exactly the way I wanted and perform just the expression I needed? Oh, and they had to be OK being used to paint an ugly witch. 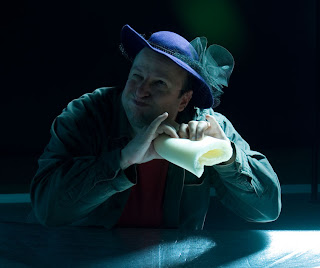 MYSELF! BRILLIANT! I set the lights up high and behind me and put a silver reflector as the "table" so to reflect the haunting light up from below. It didn't end up as strong as I wanted but I was able to punch it in the illustration. I just needed information about where the light would reflect. The image was shot in RAW and so I could tint it how I wanted before exporting it to Photoshop. Now it may look perfect but it took me about 15 shots to get the angle of the face and the mouth. I had wanted to have poofy cheeks but my eyes open in a dreamy ecstasy but anatomically that just doesn't happen. There was more than enough information, however to paint from.

I decided to try it digitally and first sketched out the values and basic color scheme: 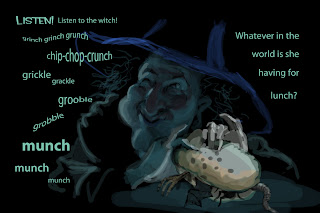 Afterward I rendered the shapes more and used digital color as well as the liquify filter to make some adjustments to the original drawing. I used the smudge tool to do much of the blending. 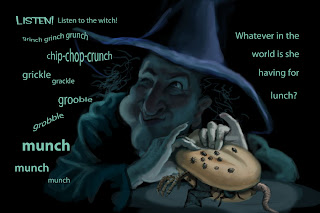