This is the second year that we have done this in our WI chapter of the SCBWI. I wasn't able to attend last year so this is my first year participating. Each illustrator was given 2 manuscripts that are currently being worked on for publication by Peachtree Publishers. Of the two, I chose one called, "Seed Magic" by Jane Buchanan. It's about a girl who wishes for a garden of beautiful flowers but, living as she does in the inner city, she has no place to plant it. A local character, the "Bird Man," an elderly wheelchair bound man with a love for the birds, gives the girl some of his seeds declaring that they are magic seeds and that if she puts them on her window ledge she will have her garden. Uncertain how that would be possible, she exercises a little faith and does as she was instructed. To her delight she finds herself surrounded, not with a garden of flowers but of beautiful birds of red, yellow and blue. 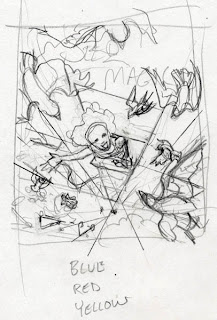 Here is the thumbnail I chose. Normally I try to do multiple thumbnails but in this case, I really knew that this was the layout I wanted.
Posted by James H. Fullmer at 8:23 AM